Note. If battery is replaced inside key fob or if key fob buttons are operated repeatedly whilst vehicle is out of range and central locking / alarm system becomes inoperative, carry out the following reinitializing procedure. 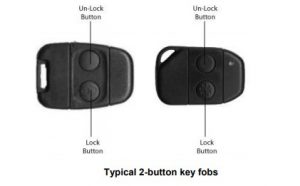 The Rover 200, codenamed R3, was smaller than the Honda-based R8 cars. This was due to Rover’s need to replace the ageing Metro, which by now was 15 years old. Although some elements of the previous 200 / 400 were carried over (most notably the front structure, heater, steering and front suspension), it was by-and-large an all-new car that had been developed by Rover. Honda did provide early body design support as a result of moving production of the Honda Concerto from Longbridge to Swindon, freeing up capacity for 60,000 units at Rover. At this point, the car had a cut-down version of the previous car’s rear floor and suspension and was codenamed SK3. (Source Wiki)

You may have missed